Book recommendations and learning resources for

We live in a world that is broken. For those who believe that there "must "be a more efficient way for people to get things done, here from Scrum pioneer Jeff Sutherland is a brilliantly discursive, thought-provoking book about the management process that is changing the way we live. In the future, historians may look back on human progress and draw a sharp line designating ""before "Scrum" and ""after" Scrum." Scrum is "that" ground-breaking. It already drives most of the world's top technology companies. And now it's starting to spread to every domain where people wrestle with complex projects. If you've ever been startled by how fast the world is changing, Scrum is one of the reasons why. Productivity gains of as much as 1200% have been recorded, and there's no more lucid - or "compelling" - explainer of Scrum and its bright promise than Jeff Sutherland, the man who put together the first Scrum team more than twenty years ago. The thorny problem Jeff began tackling back then boils down to this: people are spectacularly bad at doing things quickly and efficiently. Best laid plans go up in smoke. Teams often work at cross purposes to each other. And when the pressure rises, unhappiness soars. Drawing on his experience as a West Point-educated fighter pilot, biometrics expert, early innovator of ATM technology, and V.P. of engineering or CTO at eleven different technology companies, Jeff began challenging those dysfunctional realities, looking for solutions that would have global impact. In this book you'll journey to Scrum's front lines where Jeff's system of deep accountability, team interaction, and constant iterative improvement is, among other feats, bringing the FBI into the 21st century, perfecting the design of an affordable 140 mile per hour/100 mile per gallon car, helping NPR report fast-moving action in the Middle East, changing the way pharmacists interact with patients, reducing poverty in the Third World, and even helping people plan their weddings and accomplish weekend chores. Woven with insights from martial arts, judicial decision making, advanced aerial combat, robotics, and many other disciplines, "Scrum "is consistently riveting. But the most important reason to read this book is that it may just help you achieve what others consider unachievable - whether it be inventing a trailblazing technology, devising a new system of education, pioneering a way to feed the hungry, or, closer to home, a building a foundation for your family to thrive and prosper. 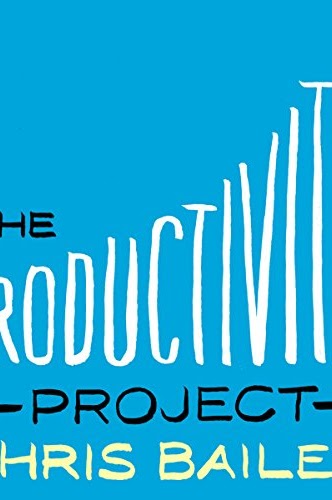 A fresh, personal, and entertaining exploration of a topic that concerns all of us: how to be more productive at work and in every facet of our lives. Chris Bailey turned down lucrative job offers to pursue a lifelong dream—to spend a year performing a deep dive experiment into the pursuit of productivity, a subject he had been enamored with since he was a teenager. After obtaining his business degree, he created a blog to chronicle a year-long series of productivity experiments he conducted on himself, where he also continued his research and interviews with some of the world’s foremost experts, from Charles Duhigg to David Allen. Among the experiments that he tackled: Bailey went several weeks with getting by on little to no sleep; he cut out caffeine and sugar; he lived in total isolation for 10 days; he used his smartphone for just an hour a day for three months; he gained ten pounds of muscle mass; he stretched his work week to 90 hours; a late riser, he got up at 5:30 every morning for three months—all the while monitoring the impact of his experiments on the quality and quantity of his work. The Productivity Project—and the lessons Chris learned—are the result of that year-long journey. Among the counterintuitive insights Chris Bailey will teach you: · slowing down to work more deliberately; · shrinking or eliminating the unimportant; · the rule of three; · striving for imperfection; · scheduling less time for important tasks; · the 20 second rule to distract yourself from the inevitable distractions; · and the concept of productive procrastination. In an eye-opening and thoroughly engaging read, Bailey offers a treasure trove of insights and over 25 best practices that will help you accomplish more.

The Pyramid Principle - Logic in Writing and Thinking

The communication of ideas, whether to colleagues or clients, is one of the key factors in determining personal success. The Pyramid Principle shows how to structure and present arguments so that they gain immediate understanding.

Working Backwards - Insights, Stories, and Secrets from Inside Amazon

'Essential for any leader in any industry' – Kim Scott, bestselling author of Radical Candor Working Backwards gives an insider's account of Amazon's approach to culture, leadership, and best practices from two long-time, top-level Amazon executives. In 2018 Amazon became the world’s second trillion dollar company after Apple: a remarkable success story for a company launched out of a garage in 1994. How did they achieve this? And how can others learn from this extraordinary success and replicate it? Colin Bryar started at Amazon in 1998; Bill Carr joined in 1999. Their time at Amazon covered a period of unmatched innovation that brought products and services including Kindle, Amazon Prime, Amazon Echo and Alexa, and Amazon Web Services to life. Through the story of these innovations they reveal and codify the principles and practices that have driven the success of one of the most extraordinary companies the world has ever known, from the famous 14-leadership principles, the bar raiser hiring process, and Amazon’s founding characteristics: customer obsession, long-term thinking, eagerness to invent, and operational excellence. Through their wealth of experience they offer unprecedented access to the Amazon way as it was refined, articulated, and proven to be repeatable, scalable, and adaptable. Working Backwards shows how success is not achieved by the genius of any single leader, but rather through commitment to and execution of a set of well-defined, rigorously-executed principles and practices that you can apply at your own company, no matter the size.

Made in Japan - Akio Morita and Sony

Sony is one of the most powerful and respected multinational corporations in the world, and Akio Morita is its outspoken chairman. From his global perspective, Morita provides an informative and highly entertaining look at how Japanese business really works.

Business Model Generation is a handbook for visionaries, game changers, and challengers striving to defy outmoded business models and design tomorrow's enterprises. If your organization needs to adapt to harsh new realities, but you don't yet have a strategy that will get you out in front of your competitors, you need Business Model Generation. Co-created by 470 "Business Model Canvas" practitioners from 45 countries, the book features a beautiful, highly visual, 4-color design that takes powerful strategic ideas and tools, and makes them easy to implement in your organization. It explains the most common Business Model patterns, based on concepts from leading business thinkers, and helps you reinterpret them for your own context. You will learn how to systematically understand, design, and implement a game-changing business model--or analyze and renovate an old one. Along the way, you'll understand at a much deeper level your customers, distribution channels, partners, revenue streams, costs, and your core value proposition. Business Model Generation features practical innovation techniques used today by leading consultants and companies worldwide, including 3M, Ericsson, Capgemini, Deloitte, and others. Designed for doers, it is for those ready to abandon outmoded thinking and embrace new models of value creation: for executives, consultants, entrepreneurs, and leaders of all organizations. If you're ready to change the rules, you belong to "the business model generation!"

Wall Street Journal Bestseller Is it possible to be at your best even when you are underqualified or doing something for the first time? Is it still possible, even after decades of experience, to recapture the enthusiasm, curiosity, and fearlessness of youth to take on new challenges? With the right mindset—with Rookie Smarts—you can. In a rapidly changing world, experience can be a curse. Careers stall, innovation stops, and strategies grow stale. Being new, naïve, and even clueless can be an asset. For today’s knowledge workers, constant learning is more valuable than mastery. In this essential guide, leadership expert Liz Wiseman explains how to reclaim and cultivate this curious, flexible, youthful mindset called Rookie Smarts. She argues that the most successful rookies are hunter-gatherers—alert and seeking, cautious but quick like firewalkers, and hungry and relentless like pioneers. Most importantly, she identifies a breed of leaders she refers to as “perpetual rookies.” Despite years of experience, they retain their rookie smarts, thinking and operating with the mindsets and practices of these high-performing rookies. Rookie Smarts addresses the questions every experienced professional faces: “Will my knowledge and skills become obsolete and irrelevant? Will a young, inexperienced newcomer upend my company or me? How can I keep up?” The answer is to stay fresh, keep learning, and know when to think like a rookie. Rookie Smarts isn’t just for professionals seeking personal renewal; it is an indispensible resource for all leaders who must ensure their workforces remains vital and competitive.

The Five Dysfunctions of a Team: Team Assessment

The Five Dysfunctions of a Team Workshop Team Assessment is a 38-item paper handout that is an excellent team development tool. A key component of the facilitator-lead Five Dysfunctions of a Team Workshop, the Team Assessment delivers what the name implies "a team assessment" rather than an individual self-assessment. It provides participants with an opportunity to begin exploring the pitfalls that are side-tracking their team. Easy to use, the Assessment is ideal for team off-sites, retreats, or a series of team development meetings. It will help teams of all types increase their cohesiveness and productivity.

Leading a fast-growing team is a uniquely challenging experience. Startups with a hot product often double or triple in size quickly—a recipe for chaos if company leaders aren’t prepared for the pitfalls of hyper-growth. If you’re leading a startup or a new team between 10 and 150 people, this guide provides a practical approach to managing your way through these challenges. Each section covers essential strategies and tactics for managing growth, starting with a single team and exploring typical scaling points as the team grows in size and complexity. The book also provides many examples and lessons learned, based on the authors’ experience and interviews with industry leaders. Learn how to make the most of: Hiring: Learn a scalable hiring process for growing your team People management: Use 1-on-1 mentorship, dispute resolution, and other techniques to ensure your team is happy and productive Organization: Motivate employees by applying five organizational design principles Culture: Build a culture that can evolve as you grow, while remaining connected to the team’s core values Communication: Ensure that important information—and only the important stuff—gets through

The Advantage - Why Organizational Health Trumps Everything Else In Business

There is a competitive advantage out there, arguably more powerful than any other. Is it superior strategy? Faster innovation? Smarter employees? No, New York Times best-selling author, Patrick Lencioni, argues that the seminal difference between successful companies and mediocre ones has little to do with what they know and how smart they are and more to do with how healthy they are. In this book, Lencioni brings together his vast experience and many of the themes cultivated in his other best-selling books and delivers a first: a cohesive and comprehensive exploration of the unique advantage organizational health provides. Simply put, an organization is healthy when it is whole, consistent and complete, when its management, operations and culture are unified. Healthy organizations outperform their counterparts, are free of politics and confusion and provide an environment where star performers never want to leave. Lencioni’s first non-fiction book provides leaders with a groundbreaking, approachable model for achieving organizational health—complete with stories, tips and anecdotes from his experiences consulting to some of the nation’s leading organizations. In this age of informational ubiquity and nano-second change, it is no longer enough to build a competitive advantage based on intelligence alone. The Advantage provides a foundational construct for conducting business in a new way—one that maximizes human potential and aligns the organization around a common set of principles.